There are few things more empowering than being confident you can stroll into a new job whenever you like, daisy chaining your career through successively better paid and more interesting roles.

And we're really bad at doing it in this country.

In many sectors no one really job hunts. Once they have got a job they stop, hoping to never have to do a cv again. Understandable but a choice that truncates your potential in many circumstances.

IT can be a sector where the opposite is true. At a city firm I worked at our longest-serving IT staff member of 40 was about 2 years and he was head of department. A combination of narcissistic CEOs who rather liked poaching their rivals' best people and aggressive recruiters who would headhunt anyone who had been a year somewhere meant these people were always finding better offers.

Lorry drivers on the other hand - they have mediocre pay and conditions despite being a massive skill shortage profession because they put up with them rather than hopping to a firm paying £2 an hour more. (Big generalisation obviously).

Brexit plus the pandemic is a massive economic game-changer. There will be no return to normal. Some sectors are almost certainly toast (cruise ships perhaps) even in a covid-safe world if we ever get back to one.

However that means new opportunities, new ways of doing business.

My hot tip just now is Customs Agent. Most people hate filling out forms, there's going to be a ton of work for you if you don't mind work of that nature.

Otherwise I'm not going to make predictions because if you identify a sector and decide that's what I'm interested in and research it you will soon know much more than me.

So basics of career planning: talk to a wide range of amateurs then talk to at least one professional. Career planning is a profession now, has been for about 15 years and we're good at it. I watch people take career advice from a teacher or a parent or some bloke down the pub and think would you let them do brain surgery or build you a rocket? Amateurs will have bright ideas but they basically don't know shit about careers. They don't even know how to think about careers.

So sound out amateurs, get free professional advice from somewhere like https://nationalcareers.service.gov.uk/about-us read up how career planning works, make a mind map of careers that appeal to you, inventory your professional strengths and transferable skills.

It's the perfect time to do this.

Or you can sleep on this, stumble into the first job that'll have you and hope you get really really lucky.

Apes groom each other to make each other feel valued. It's a big factor in their health.

The equivalent of grooming online is Likes, Upvotes and Awards.

This means we have the power to encourage and nurture people who post on reddit if we give out awards. It's grooming them. (In the primate sense not any other!).

If you post on reddit you will over time get reddit points which can only be spent on cosmetic "upgrades" and an increasing array of awards. These awards can be used to help make other posters feel valued.

I realised earlier on that I had 300 points to spend and no plan to spend them on anything. So I looked at the awards and the cheapest one was 20 points. So I gave 15 posters an award, mostly in the /rveganuk subreddit.

Picking the cheapest makes sense because no one knows what any of these awards signify and people probably can't differentiate between an expensive one and a cheap one. In fact the cheap ones look actually quite nice. 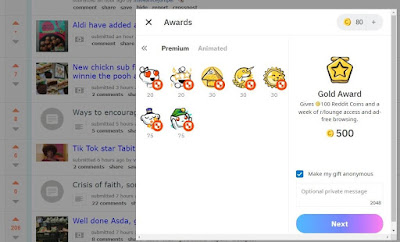 (At the time of writing Premium is where the cheapest ones are but if you're spending a load of points it's worth checking first if there are any cheaper).

So there you go: make some of the people whose posts you like feel appreciated and valued. Upvote them too.

Scottish independence idea (it's an idea of pure evel).

So the issue of Scottish independence is currently stalled. Nicola Sturgeon has asked for a section 30 order of Boris Johnson to hold another independence referendum and Johnson has said no.

The Yes side is planning to put pressure on the Westminster government to say Yes. 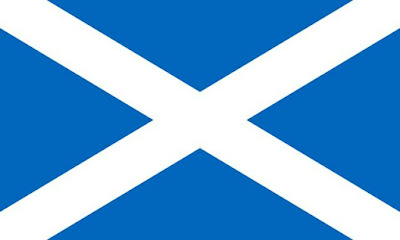 So here's an idea.

EVEL stands for English Votes for English Laws and is a convention that English MPs should have final say on matters that specifically relate to England.

Remind MPs of EVEL and point out that it is only fair that on matters that specifically relate to Scotland the same principal should apply. If this is refused ask why not. (I'll come back to this as this is key to why we would do this).

If accepted then the Scottish MPs at Westminster who are mostly SNP will simply pass the Bill through parliament and the UK government will be legally obliged to obey it.

If, as much more likely, it is refused and English Tory MPs vote down the Bill then we come back to the matters of principle.

EVEL is widely regarded as a counter-balance to the powers and the success of the devolved governments, particularly the Scottish government. There was Scotgov doing all those nice things for Scotland but with the power to block something that would level up part of England - not fair.

However the devolved governments only have powers in relation to specific sets of devolved matters.

Independence is not a devolved matter but it is quite clearly an issue that pertains to Scotland.

This means that English MPs will have been seen to decide a Scottish matter through the UK parliament where - because of EVEL - Scottish MPs are prevented by law from deciding matters that are specifically English. This is clearly unfair and possibly wrong in law.

That's why this is such a good thing for Ian Blackford's band of Westminster-based SNP MPs to do. It creates an incontrovertible example of the UK parliament denying the Scottish people rights that are available for English people.

This has value in three ways.

- it shows the people of Scotland that we are being treated unfairly by the UK government. It's one rule for them and a different rule for us.

- it shows the people of England and the rest of the UK that we are being treated unfairly by the UK government. It's one rule for England and a different rule for everyone else. This is important because the Yes movement has been so Scotland-focused that it hasn't really done enough to win hearts and minds in England where it seems that most people support Johnson's decision not to grant us a section 30 order.

- it shows the Scottish diaspora and the international community that Scotland is being treated unfairly. There was a breathtaking moment in the Brexit saga when Joe Biden, a couple of months before being elected president, announced he would not allow a US-UK trade deal that didn't respect the Good Friday Agreement. This stunned people in England. This was a triumph of Irish diplomacy. It turns out that because of the diaspora, because Biden's ancestors were driven out of Ireland many years ago, that Ireland has a solid friend in the new American president. It was a historic moment and shows how small "weak" countries can use their diasporas, their connections throughout the world to exert diplomatic power. So this EVEL point can help us convince our diaspora that we are being held captive against our will and help mobilise them to help us. Wouldn't it be great if Biden added that not only must the GFA be respected but Scotland must be allowed to choose before a trade agreement could be signed?

Welcome to Writings on Everything.

No more! I'm shaking off the shackles!

This blog will include articles on a wide range of topics. Whatever I feel like writing about at the time. Perhaps that means there's a cost to the reader although I hope not. Should you like some of my writing I hope you'll bring your skills, skills we all now have, at skipping past irrelevant internet content to get to the stuff you like.

If you're here at the start please bookmark this or add it to your feed or blogroll and be prepared to enjoy (or skip) future content. If you've touristed back to this very first post from somewhen in the future I hope that the content that will come to fill this blog entertains you and that this introduction makes sense of it. Perhaps even you'll feel that you might like to create or continue an open subjectless blog of your own to diarise your own thoughts and experiences.

It's a good time for career planning. There are few things more empowering than being confident you can stroll into a new job whenever...